Cold Summer, a wonderfully talented and energetic rock/post hardcore band from the UK, released their new EP Fight to Survive in early April of this year. 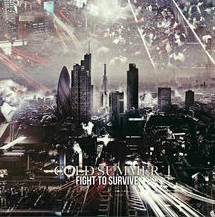 After their two EPs Transitions and Wake (2012), and full-length album Self Titled (2013), Dan Feast (Vocals), Chris Harrison (Guitar), Chris Hepworth (Bass Guitar), and Justin Eastwood (Drums) accomplished something amazing with their new release Fight to Survive. They were immensely DIY from the beginning, and the hard work that they put into this EP is shown through the extreme passion and energy within each song. The title accurately depicts what these songs are about - the everyday struggles we all face, and having to fight to survive in a variety of different circumstances. What’s really special about Cold Summer’s new EP Fight to Survive is that no matter what your personal struggle or battle in life is, you can relate to these lyrics and the music will help fuel you to overcome them. 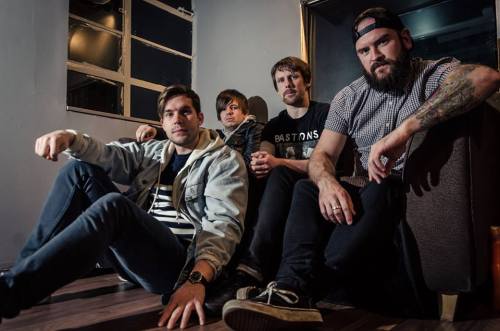 Each song on Fight to Survive speaks so much truth and has, what I feel to be, a really common perception of our world. Cold Summer has packed a great amount of depth in this 6-song EP; and everybody is different so I can’t tell you how these songs will impact you. However, what I can say is that if you put on some headphones, turn the volume up nice and loud, and block out the world while you let the music take over and the lyrics move you, I can guarantee that you will be left feeling something.

Watch Cold Summer’s music video for ‘Bear Eats Wolf’ below, and click HERE to watch their video for ‘A Time Imagination Forgot to Inspire’.

We also had an opportunity to chat with Cold Summer about Fight to Survive. Here’s our interview with the band:

You guys were very hands-on with this EP and you said you are more proud of this release than you have been about your previous ones. Do you think you will continue to take this approach in the future? It’s a lot of work, but very admirable!

Dan: From experience we aren’t intending any rush in getting our next release together, so yeah it’s going to be ok hard work but we’re really focusing on getting a substantial amount of tracks down in demo form, more than we ever have before Chris Harrison: thinking about different chord progressions, pushing boundaries with writing and seeing how we can further our work together as a band better. Justin: We don’t have a label or any pressure externally so with this in mind it’s like very hands on yeah so we’re aiming to be quite productive studio wise in the coming months, it’s certainly a challenge to us to try and really write as much as we possibly can. We’re like about nearly 2 months after releasing ‘Fight To Survive’, we haven’t accepted any tours as of yet, so for us at the moment the focus is on writing. We’re very self sufficient and we like to have control over things, we haven’t really found anyone externally (like management/label/booking agent) that is really going to move us forward so we are best as we are now. 18 months ago we were keen to look for help / guidance with this sort of thing, having a quite underwhelming experience with third parties as we discussed the release of the EP and booking shows following our tours, we just as I say are keen to stick to being self sufficient, if someone isn’t fully into your band then its never going to work.

Do you think that what you learned throughout this process, and maybe overcoming some hurdles along the way, will help you continue to grow as this sort of DIY band and consequently result in better music with each release?

Chris Hepworth: With the start we’ve made on writing at the moment for our next release I’d certainly say at this stage we are a good position, we’re a well rehearsed band and being together a lot time certainly shows, with the growth we feel between Self Titled and Fight To Survive we can certainly again step up. Justin: I’ve viewed trying to think from a non band member perspective as ‘Fight To Survive’ potentially as our kind of break through release (this in terms of I guess being heard by a larger audience than anything we have previously released), with the way the music industry is oriented and us kind of working outside of that, it’s not like there is anything stopping us from growing but it would be nice to somehow defeat the odds and be heard on y’know radio one rock show and things like that, even though we aren’t paying over the odds for a press campaign that may or may not work. I think there is that determination and belief between us that ok if its good enough it will find its way on their on its own terms, i don’t think as a band we necessarily cut corners but we’ve just really not much time for the music industry as we’re not a pop band or ‘playing the game’ as it were.

Is there anything that you would do differently next time or that you wish would have been different while making Fight to Survive?

Dan: For me in retrospect I just feel like some extra time could have been spent on recording the vocals, I felt a bit rushed in the studio. At the time of recording we’d just come off tour, I felt in my mind i was starting to lose my technique I wasn’t practicing as much as I should have been Chris Harrison: I don’t think we all felt comfortable with rushing the recording slightly of the EP, we were up all night and day recording. With what Dan was saying it certainly felt like another day in the studio would have maybe helped. Justin: Like we’ve mentioned for us going forward we’re focused on being more productive, I think in terms of getting song ideas fulfilled too, seeing things through to the end (recording demos) rather than scrapping some good ideas we’ve had that we’ve at some point decided we weren’t happy with, i can safely admit we’re perfectionists about it so i’m sure six months down the line we will be deconstructing ’Fight To Survive’

Dan, this EP is important to you because it’s about the anxiety you experience in your daily life. I personally struggle with it as well, and I think that’s why I was so drawn to Fight to Survive. How have your fans reacted to this EP, and have a lot of people told you that they can relate to what you’re expressing through your music?

Dan: One of my colleagues in my day job, he also suffers from anxiety himself, after hearing the track ‘Bear Eats Wolf’ i explained the concept to him and he got it straight away. He understood and even felt like he if experiences panic attacks he could think this way about it and a bid to overcome it, he said to me it has helped him as he feel like he talks himself into panicking.

I haven’t had the chance to go to one of your shows (yet!), so can you explain what that experience is like?

Dan: We love playing shows, so we hope this energy comes across to the rest of the crowd Justin: I think we can either be a ‘wild’ live band or we can on the other hand at other shows be focused and play tight - so you could get either one

What is your favorite local venue to play at? Is there any place around the world that you’ve always wanted to play at? There are some pretty legendary venues out there.

Chris Hepworth: Yeah for me my favourite local venue is corporation in sheffield, i’d really love to play the house of blues one-day. Chris Harrison: I quite like corporation too every time we’ve played there we’ve always had a good crowd. Dan: In the past we’ve had some great shows at the Cockpit in leeds and thats kind of moved on to the Key Club now due to it closing down. I’d love to play madison square garden one day! Justin: Yeah I’d go with the Key Club too we’ve played a couple of times this year and we’ve had a rad time! I’d love to see us play at the melkweg in amsterdam.

Do you guys have any really dedicated fans that show up to a lot of your shows? You seem to be really close with your fans, so I imagine it must be nice to see familiar faces.

Justin: We certainly do and theres a couple in particular I’ll mention. We have a friend called Pedro, who basically had checked us out online around the time we were first touring, he came to see us play in London off the back of picking up our album, later that year we announced another tour and well he had actually moved to our local area with his university studies, and when we played the local date of the tour he came down again, he has been super supportive of our band. One of my friends all the way back from school comes down to a lot of our shows, David. He again has been really supportive of the band since we started and he’s really seen us a lot of times so again a massive thank you to him for supporting us. My friend from University Lee who also tour managers / drives us, he also comes to a lot of our shows but thats not by choice haha! Dan: My friend Aaron comes to a lot of our shows too and again he’s been super supportive, like Lee has also given us a hand with driving on tour as well.

Anything exciting coming up this year that we can all look forward to?

Justin: Yeah we’ve at the moment got a couple of festival slots booked, the first is at Long Division festival, Saturday 11th June, we have another local festival which hasn’t been announced yet too. We’re a bit open at the moment we have a few possible tours kind of fall through, but its been good that despite again not having a booking agent, we have been taken i guess ‘seriously’ by people we’ve approached etc so hopefully something shortly will work out

Send a message to your fans: Just a nice thank you to everyone who’s seen us live and listened to our releases really, we’re music fans ourselves so we’re always keen to speak to likeminded people and we hope to be back on the road soon.

Overall, Cold Summer is a band that you are really going to want to get behind and enjoy. They have shown their determination to put out quality music that they’re proud of as well as music that people can relate to and feel something from after listening. Follow Cold Summer at all the places listed below so you don’t miss out on what they’re going to do next.