Over Atlantic, a young pop band with members from the US, UK and Sweden, have an ever expanding strong and active fanbase. Charlie Jones(vocals/guitar), Trevor Cash (vocals/bass), Liam Ross (lead guitar/vocals), Sean Killeen (vocals/guitar) and Gabriel Gomér (drums) came together after meeting online, and it’s undeniable that they have natural chemistry. Earlier this year, the charismatic group released their debut EP, Likes Me Like That. With frequent cover videos posted on YouTube, and the hype surrounding their first batch of tracks still present, Over Atlantic is already working hard on what’s next. 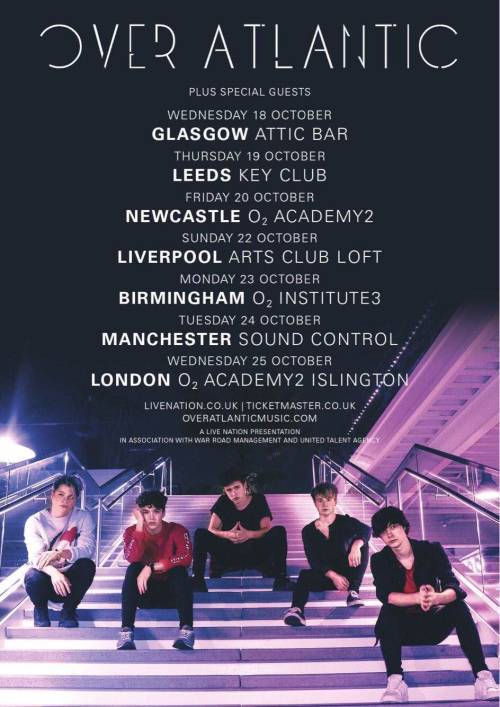 Here is what they had to say regarding their upcoming plans!

Can you tell us about your headlining tour and new set?

We’re planning on hitting the U.K. and we’re in talks to do some European dates as well. We’ve adapted our set a lot for this new tour and have been working really hard to make this our best show yet. Our goal is to bring energy, great music, and a night you’ll never forget. We’ll also be debuting some new songs on this tour and we’re really excited about that.

You guys do a great job of engaging with your supporters, and it’s fairly often that they ask what you’re doing and when they can expect more from you. You’ve been writing new music, how is that going?

We’re constantly writing as a band and trying new things. We’ve grown a lot as writers since our ep and have learned a lot from each other. We’re really excited to get out on the road and see how everyone reacts to the new songs.

Likes Me Like That is fantastic, and it seemed to have received a great response. As you continue to grow as a band and individuals, plus with a new project in progress, what will the transition be like from your debut, to who you are during this second venture?

We’ve always been progressing as a band since the day we formed as writers and performers. We’ve thought a lot about who we want to be and the music we want to make since our ep came out. We’ve been working really hard on these new songs and putting everything we have into them. Our new stuff feels a lot more fresh, new, and just more authentic to us and who we want to be. When you hear the new songs on tour we hope you’ll see what we mean.

What do you hope people who listen to your music and go to your shows experience?

We want them to go home from our shows and dream about that night for weeks and can’t help but tell their friends about it. We hope that when someone comes to one of our shows they can forget about everything for an hour and have the time of their life. When we write, especially the new songs, we write a lot about our thoughts and life experiences and we hope people can connect and relate to our songs and feel what we feel.  iTunes Spotify Twitter Instagram Facebook YouTube